Endometriosis: Everything You Need to Know

How to Prepare Yourself and Your Home for a Newborn

Ovarian cancer is one of the most deadly of women’s cancers, more common than vaginal or vulvar cancer. Here are some things you should know:

The symptoms of ovarian cancer are often subtle and easily confused with other ailments. Most new cases are diagnosed at Stage 3 or later, meaning the cancer has already begun to spread to the lymph nodes and outside the pelvis.

Ovarian cancer is hard to detect due to your ovaries being deep in your abdomen. There are four common symptoms of ovarian cancer which include:

Other symptoms may also include:

It’s important to note that many of these signs and symptoms are not exclusive to ovarian cancer. If you are experiencing these symptoms for more than two or three weeks continuously, contact your doctor for possible examinations. 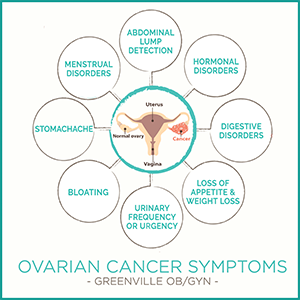 Ovarian cancer is categorized into four stages. If diagnosed, your doctor will determine what stage the cancer is.

Stage I: The cancer is completely contained within the ovary or ovaries

Stage II: The cancer is in one or both of the ovaries and has spread to additional organs located in the pelvis such as the bladder, colon, rectum or uterus

Stage III: The cancer is in one or both ovaries and has spread to one or both of the following: the lining or the abdomen or the lymph nodes

Stage IV: This is the most advanced stage of ovarian cancer. The cancer has spread from one or both ovaries to additional organs such as the liver or lungs, or there may be cancer cells in the fluid surrounding the lungs.

Many women don’t get or seek treatment until the disease has begun to spread, but if detected during Stage I, the five-year survival rate is more than 93%.

Studies have found that women who have a mother, daughter or sister with ovarian cancer have had an increased risk of development.  In addition to the genetic risk that comes from having a family history of ovarian cancer, postmenopausal women should be aware of the following risk factors:

The National Cancer Institute says certain genetic testing can determine if you have an increased risk of developing ovarian cancer from having the BRCA1 or BRCA2 gene. These genes produce tumor suppressor proteins which help repair damaged DNA, but when mutated or altered damaged DNA may not be able to be repaired properly. This can then lead to cancer cells forming.

Endometriosis: Everything You Need to Know

Endometriosis is a common condition with plenty of misconceptions. The disease occurs when tissue called endometrium, similar to the tissue that normally lines the uterus, grows in other parts of the body. Endometriosis affects as many as one in 10 American women. It can cause pain, scarring, and even infertility.